Get the book! | "Memorizing Worship Songs" -> CLICK HERE!
You are here: Home / Guitar / 3 Ways to Be a Better Worship Acoustic Guitarist 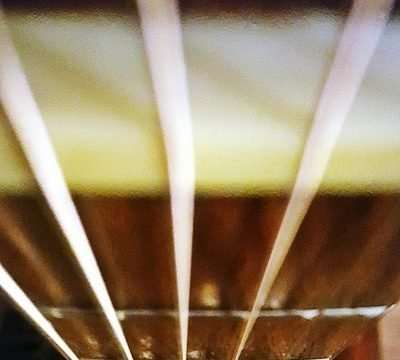 So I’ve been playing guitar since 2001. I actually started out playing drums. My brother and I got a drum set to share one Christmas, but he ended up getting better faster than me. So I decided to look for a new instrument, and guitar was my next choice. Looking back, that was one of the best decisions I could have made. Learning to play guitar with a drummer in the house was a benefit to me that I wouldn’t realize until later in life. It taught me how to play with the beat of the song in a way most guitarists do not learn on their own. Here are 3 ways to be a better worship acoustic guitarist that I have learned over the years.

Probably the most important thing to do as an acoustic guitar player (or musician in general) is to listen to what everyone else is doing. Playing acoustic is about filling out the sound and blending in. It may sound crazy, but the best acoustic guitarists don’t always stand out in a song.

Playing music in a band is a lot like a conversation. Both sides have something to say, but if you’re both talking at the same time, you’re going to miss what is being said. So when you’re playing acoustic, try to facilitate the song, not dominate it.

Every band needs at least one musician to “carry” the song. Often times it makes sense for acoustic guitar to play that part. Other musicians I’ve played with over the years have told me how much they like playing with me because of how solidly I play. I don’t do anything flashy or noticeable. I just know the music and play it along with everyone else.

Knowing the music goes a long way, and you’d be surprised how many people don’t know the songs when rehearsal and service time comes (…or maybe you wouldn’t be surprised because you know people who do this!). When you don’t have the song memorized, you have to stare at a chord chart during the service, which disengages you from what’s happening in the room. You can become too absorbed in the chart in front of you and miss a cue from your leader or other band mate. So practice before you get there and memorize the music. (See how you can maximize your practice time.)

That brings me to my last point – PRACTICE! Not only do you need to practice the songs you’re playing next service, but also any other songs that will push the limit of your skills.

I grew up playing a lot of Dave Matthews Band with my brother (Carter Beauford from DMB was his favorite drummer), and later on, I learned a few difficult John Mayer songs. In Christian music, I played a lot of Jars of Clay. Steven Curtis Chapman also uses a lot of interesting music. The point is, find some songs that have new and different chords or strum patterns and learn them. The more chords and strumming patterns you learn, the better off you are down the road when you need to think on your feet (I’ll post more on that another day).

Like with everything else in life, you’ll get out of it what you put in. So if you’re serious about becoming a better worship acoustic guitar player, you’ll need to put some time in.

No matter your background or how long you’ve been playing, everyone can (and needs to) get better. Just remember these 3 key things…

Which of these 3 things is the hardest or easiest for you? Leave a comment and join the conversation.