Get the book! | "Memorizing Worship Songs" -> CLICK HERE!
You are here: Home / Guitar / Make the Most of Your Worship Practice Time 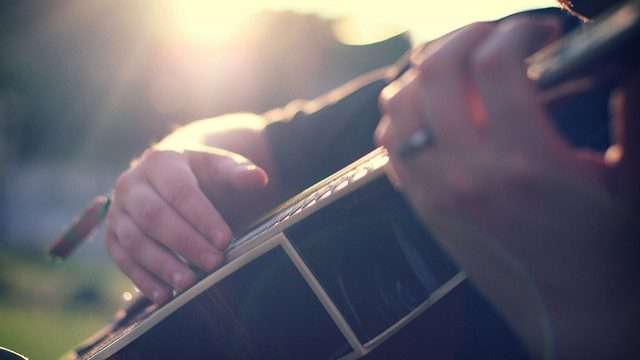 Over the years, I’ve had to learn quite a few new songs for church. Some are easy, and others take more time and effort. In either case, I’ve found that good preparation up front saves rehearsal time with the band later. Band rehearsal time is not ideal for learning a new song anyway. Do yourself and your band mates a favor by following this guide to maximize your time and effort learning a new worship song.

Listen to the song without your guitar. Listen to it multiple times – while driving, running, etc. You’ll subconsciously learn how the song sounds and how it is structured. This will give you a head start on the next phase of learning the song.

Look at the chord charts while listening to it (still not playing yet). This allows you to match the chord changes up with the chart you have. This is especially handy if the chords are not written above the right lyrics, which is common with many online free chord charts these days.

Now that you’ve focused on the sound and timing of the chord changes, it’s time to play it yourself! Practice playing along with the track while you look at the chord chart. This will reveal any difficult spots for you to play. Focus on any rough parts of the song until you can play them smoothly.

Play the song as many times as you can with the track. At this point, start playing it by memory as much as possible until you can play it completely without looking at the chart. This is my favorite part. I’ve stayed up until 3 am practicing songs before. Time really does fly when you’re having fun!

Play the whole song by memory without the music. Not only does this help you memorize it even more, but it also will show you any parts you may be playing wrong or don’t know that well. Fix those parts if need be. You should be able to carry the whole song yourself and freely switch between different parts of the song. Many times it is the role of the acoustic guitarist to be the foundation and follow the worship leader’s changes, so you need to be prepared.

Practice In Your Head

Congratulations! From now until you play this song in the worship service, you can practice in your head. When you find time to listen to the song, visualize yourself playing the chords along with the song. My favorite time to do this is while driving. I’ll use the steering wheel as the neck of the guitar and the center console to strum on. I’ve used this many times to get more worship practice time in before a Sunday morning service.

Don’t worry if you can’t do all of these steps right away. The important part is that you practice. Like anything in life, you get out of it what you put in. Once you can work your way up to practicing in your head, you’ll be free to learn more songs in less time.

Question: Do you have your own tried and true worship practice method? Do you like one of the ways outlined above? Leave a comment below. Join or start a conversation.