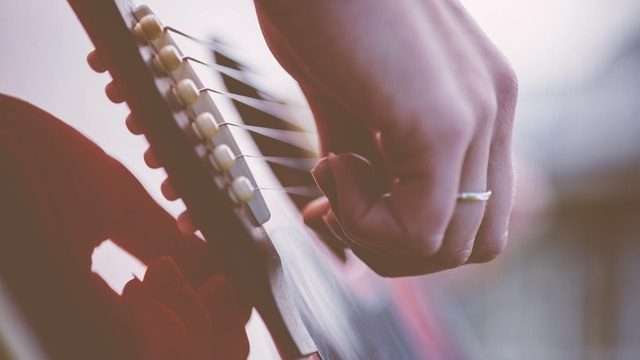 As I learned to play guitar, I did so playing mostly on an electric guitar. I’m not sure what it was, but I was drawn to chords and different strumming patterns. Some of my first influences were Jars of Clay and Dave Matthews Band. In addition to those “professional” music influences, growing up learning to play guitar while my brother was learning to play drums has also given me a percussive perspective of the acoustic guitar.

This post is the first in a series of “Acoustic Guitar Fundamentals” posts I’ll be doing as I build out my first course in the Acoustic Worshiper Community. In this post, we’ll go over some of the fundamentals of strumming.

The purpose of the acoustic guitar is to make music. That may seem basic, but this is about fundamentals, after all. So the goal of any single instrument in music is to add to the overall mix of the other instruments. That’s what music is. It’s a bunch of sounds coming together to make one sound. The whole (music) is greater than the sum of the parts (instruments).

When it comes to strumming, you basically just don’t want to get in the way of the song. There are ways you can add to the mix, but most of the time, you’re going to be there to support it. One of the biggest mistakes by acoustic players is strumming to their own rhythm and sticking out like a sore thumb.

Since I learned to play guitar while playing with a drummer (my brother), I learned at an early stage to play WITH another musician. It’s hard to quantify with words, but one way to grow your skills in this area is to listen more than you play. Just like a conversation, the more you listen, the more you learn about what the other side is saying.

Listen to the other musicians you’re playing with, and try to mix in and mirror what they are doing. Snare hits can be accented in your own strumming patterns. If the electric guitar is doing only down-strums and the drums are building on the floor tom and snare, you should strum the same way.

The more you do this, the better you’ll get a picking out how you should play.

Be on the lookout for Part 2, where I’ll talk about the other hand – the fretting hand.

In the meantime, leave a comment below if this post has made you think about your playing style differently. That’s why I’m here and why I make these posts. I want to help YOU get better and play in a way that brings glory to God.

So join in on the conversation, and let me know if you need anything from me.