Get the book! | "Memorizing Worship Songs" -> CLICK HERE!
You are here: Home / Guitar / 6 Ways to Improve Your Sound When Playing Solo 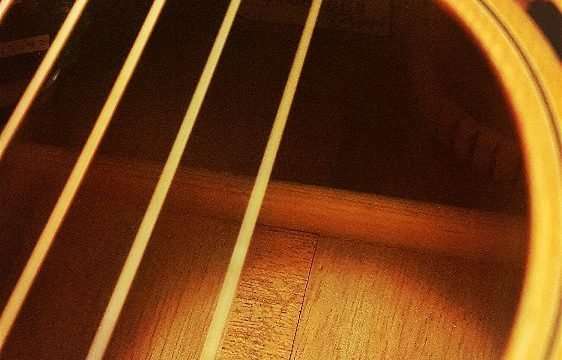 Over the years I’ve gotten a lot better at playing worship acoustic guitar by myself. I’ve learned there’s a lot more skill required when you’re the only guitar, and it often involves doing less. For a while I played acoustic guitar for the Wednesday night youth services at our church. Usually it was just me playing acoustic and our worship leader singing. With the acoustic guitar being the sole music provider, it pushed me to find creative ways to make songs sound fuller. With that experience plus all my other years, I have distilled my ideas and experiences down into this very special post for you. So here are the 6 things the smartest worship acoustic players do solo.

Using different voicings (inversions) of chords during different parts of the song can really help you out, too. A “G” chord, for example, could be played as 3x04xx instead of 3×0033 or 320003. Using different versions of the chord will easily add to the dynamics of the song. Another example that is popular in worship music is to play an E as 079900 instead of 022100. Another one of my favorite chords is x54030 in place of a D chord, which is usually played xx0232. Be careful with these, though. All chord voicings are not interchangeable directly. Depending on the melody, you’ll have to see if that version of the chord fits.

You need to be able to go back and forth between regular strumming, picking with a pick, and finger-picking without a pick. It’s a little tough to do at first, but you can move the pick between your index finger & your thumb (regular position) and then two of your other fingers. I use my index finger and middle finger knuckles. It takes some practice for sure, but the rewards are worth it. You get the most benefit from this technique when you’re playing by yourself, but it’s still useful in a full band setting, too.

This is one of my favorites. During version parts of a song it is possible to strum the chords and still throw in some accent picking. This almost sounds like two guitars if you can do it right. One song that comes to mind is Break Every Chain. In the intro to this song I like to strum the chords softly and then on the last chord of the progression I pick the E, B, and G strings for a little accent riff. This is extremely handy in intros and breakdowns in songs.

I’m cases where you don’t have a drummer, you’ll need to add percussiveness to your playing style – especially when playing by yourself. This can be done by strumming and hitting all the strings muted, or you can do this just by strumming with different levels of attack between strums. Songs are driven by rhythm and melody, so without drums you have to fill that void. If you don’t have drums, people tend to start clapping with the beat. If you can give them a little more guidance and help them feel the rhythm, you’ll be much better off.

I saved this one for last, because it’s my least favorite. Mainly because if you’re playing more than one song in a set, you’ll have to adjust every song for that alternate tuning. Most of the time if you do this, all of your songs will end up sounding the same no matter how you play them. Alternate tunings, also sometimes known as open tunings, do sound great, but they don’t allow for much variation. Johnny Rzeznik of the Goo Goo Dolls used this a lot in the nineties. It gave them a distinct sound, but all of his playing sounded the same, too. Nothing wrong with it, but as an acoustic player it can put you in a box. Alternate tunings are worth playing around with, just be careful to not over use them. They can become a crutch and prevent you from progressing with your skills and learning more.

There’s no replacement for practice and experience, but if you focus on these areas, you will be able to maximize your efforts.

Let me know what you think in the comments below – if you agree or disagree with any of these. I would love to get your thoughts!